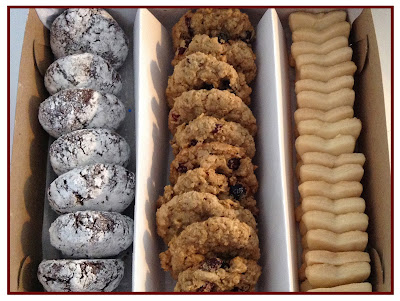 This being the month of my birthday as well as Christmas, I get to do far more baking than the rest of the year. On my birthday, I usually have a few friends over for dessert, but this year my TOPS group Christmas dinner happened to coincide with my birthday, and it has become my honour to make the dessert for that event, so I had to bake for 18 people instead of four.

I made three different desserts plus the usual cranberry sauce to go with the turkey. I made some pulled taffy as well, as a little gift to each guest.

Dessert No. 1: Cheesecake. By popular demand, I had to serve the same cheesecake as last year. A total cop-out on my part, this so-called cheesecake is really an unbaked cheese pie but who am I to argue with local tastes? The recipe is from the Kraft website and it’s called “It’s-a-Snap Cheesecake” (Oops! I see they’ve renamed it “It’s-a-Snap Gelatin Cheesecake”. And they should call it “pie”, it’s certainly not a cake.)

I made a recipe and a half because I was using my extra-big 9” pyrex pie plate. Last year, my cracker crumb was too crumbly, so I thought if I prebaked it it would stick together better… well it did, but it got very hard. I think the secret is just to make sure your crumbs are moist enough to stick together. (Hint: I had never made a graham cracker crust in my whole life!)

To improve the appearance, I decorated it with fruit (peach last year, pineapple bits this year).

I find that dessert utterly boring, by the way. If you like real cheesecake, and can afford it, do not bother with this pastiche. On the other hand, a nice raspberry coulis could make it really palatable.

Dessert No. 2: Upside-Down Cake. Last year I did my favourite pineapple one from Food That Really Shmecks, and, this year, another traditional favourite, Pouding Chômeur - sometimes translated as Poor Man’s Pudding.

This dessert - best described as an upside-down caramel cake - was a hands-down favourite in all my restaurants, yet it really is economical with its minimal amount of butter and single egg. I always double the amount of brown sugar sauce, to have some extra to pour on top of the cake. Some people add maple syrup to the sauce.

My own recipe is somewhere in the attic, so I googled for one and found hundreds. I printed out this one from Ricardocuisine.com, and another from the French CBC show L”Epicerie. The latter has a video on YouTube where you can see exactly how it’s made (in French).

Serve warm or even hot from the oven, with ice cream, or heavy cream.

Dessert No. 3: Vanilla Ice Cream. I like vanilla ice cream without eggs, and this is as good a recipe as any.

And don’t forget that when you freeze the ice cream maker container, you must make sure it’s sitting up straight or the gel inside the walls won’t freeze evenly and your ice cream may not thicken as well as it should.

You will still get better ice cream than anything you can buy, and at a fraction of the cost due to the combination of cream and milk.

NOTE: Toasted sugar did improve the flavour I'm sure.

Toasted Sugar: I had no idea that this even existed. I stumbled upon it on SeriousEats.com when looking for a meringue recipe.

There are two articles: one on the quick method - it’s the one I used for the ice cream.

Another for the “deeply toasted” version.

I made both, and used the quickie in the above ice cream and cheesecake and the slow method for the Chocolate Crinkle Cookies I made for Christmas. See further on.

Homemade Brown Sugar: I didn’t make any, but now that I know how to make it, I will not be buying brown sugar again. Basically, you just add molasses to regular sugar. Considering how cheap plain sugar is if you buy it in quantity, why would you waste money on something that takes two seconds?

I found this recipe on thekitchn.com - and Martha Stewart has a recipe on her site.

Molasses Taffy (Tire Sainte-Catherine): If you went to Catholic school in the ‘40s and ‘50s, every November 25 you would celebrate St. Catherine’s feast day by making pulled taffy. (St. Catherine is the patron saint of old maids -- I guess that includes nuns and little girls!).

I found a zillion recipes and videos. I used a French one, but this one is in English and is as good as any.

Here is the recipe, in case you don’t have access to Google Books (or just order Classic Canadian Cooking - it's a great book.)

Remove the cloves, add 4 cups of cranberries and simmer uncovered until they pop. Cook longer if you like your sauce thicker.

NOTE: in Canada, a package of cranberries contains only 3 cups, so I reduce the sugar and water proportionately. The other ingredients I leave as is.

Eye of Round Roast Beef: My local supermarket had beef eye of round on special, and knowing how dry and tough that cut is, I looked for a way of making it palatable. I found this recipe on Christopher Kimball’s new site, 177milkstreet.com.

I cooked it as a special birthday dinner for myself - it turned out beautifully! I had some hot, I had some sliced paper-thin in sandwiches, I had some as beef salad, and I froze the rest.

This recipe is definitely a keeper.

TIPS: (1) Use an electric knife to get those paper-thin slices for your sandwiches. (2) Beef Salad: cut ¼-inch slices of beef into strips, combine with kalamata olives, either whole or pitted and/or sliced, sliced celery, finely sliced red or other sweet onions and lots of chopped parsley. Toss with a very garlicky and dijon-mustardy vinaigrette made with red wine vinegar and virgin olive oil. Salt and pepper to taste, and you can throw in a sliced hard-boiled egg if you have one. Make plenty as it tastes even better the next day. (Substitute roast leg of lamb for the beef if that's what you have.)

Shortbread Cookies: I will forever associate shortbread cookies with my dear friend Bernice, who passed away this year. I once asked her what was the secret of their special melting texture, and she told me that she used part wheat flour and part rice flour.

For my first attempt at those delicacies, I found two interesting recipes, so I combined them.

The first one, from Robin Hood Flour Mills' website, contains ⅓ corn starch and ⅔ flour, plus lots of butter and a mixing technique I liked - you just use your bare hands! The second recipe, from Canadian Living, tells you how to deal with the dough if you want to shape the cookies with a cookie cutter.

The Robin Hood recipe didn’t call for vanilla but I added some, as specified in the Canadian Living recipe. I also added salt since I used unsalted butter.

Instead of recombining and re-rolling the leftover bits and pieces, I made balls out of them and flattened them with a fork as Robin Hood suggests.

Next time I will look for a recipe where the ingredients are weighed -- I hate the uncertainty of those cups and spoons --, and I will hope that they will be as meltingly exquisite as these were.

Chocolate Crinkle Cookies: I’m really not a baker, so it’s no surprise that I had never made this kind of cookie.

The recipe came to me via the Serious Eats newsletter, and I got interested in it mostly because I had every single ingredient in my pantry.

I followed the recipe exactly except that I used toasted sugar, and I decided that rolling them in regular sugar first, then in the icing sugar - as suggested by Cooks Illustrated - was probably a good idea, so I did that. I’ll never know if it was, but what I do know is that if I ever open a cookie business, Chocolate Crinkle Cookies will be at the top of the menu.

And, surprise! They are even better the next day.

Oatmeal Cookies: To complete the triad, what better than my very own favourites, good old oatmeal cookies.

Recently, I have adopted Serious Eats' “Easy One-Bowl Oatmeal Cookies” recipe, substituting unbleached flour and quick-cooking oatmeal — in spite of the warnings of dire consequences — and so those are the ones I made.

They have an amazing flavour and texture, but I have made a note to cut down on the sugar and on the cranberries next time.

Stay tuned for an update on that.

Oh, and the one-bowl method really works. Next time I may try it with another recipe, perhaps the one on the Quaker Oatmeal box that I saw highly recommended the other day.

GIFT PRESENTATION: For the gift boxes like the one in the photo, I got some pie boxes at the Bulk Barn (59 cents each), which I lined with tissue paper that has little coloured flecks in it. I made the separators with some card stock that I use for printing. I got two separators out of each 8.5 x 11” sheet. Then I tied the boxes with bright red Christmas ribbon.

Gina
Retired chef/restaurateur, born in Montreal many moons ago. My current interests include cooking, eating, sewing, drawing, bookbinding, learning stuff (Italian these days), pretending to play the piano, and remembering Mexico where I lived for over 20 years, and travelling to Italy. In my spare time, I relive the good times.

I retired from the cooking profession many years ago, but I have never stopped cooking, even though what I prepare in my kitchen now is mostly different from what I used to serve my customers.
In a way, then, I'm relearning how to cook, and that's why I so often sound like I don't know what I'm doing! For example, I can make you a batch of puff pastry blindfolded, but to bake a pan of muffins, I need a recipe and I cross my fingers when I slide the pan into the oven! Coq au vin is easy, but believe it or not I have never made a meat loaf.
It is those simpler home-cooked dishes made from scratch that I want to share with you here. Please feel free to share your own experiences and to comment about mine.
Bienvenue dans ma cuisine!